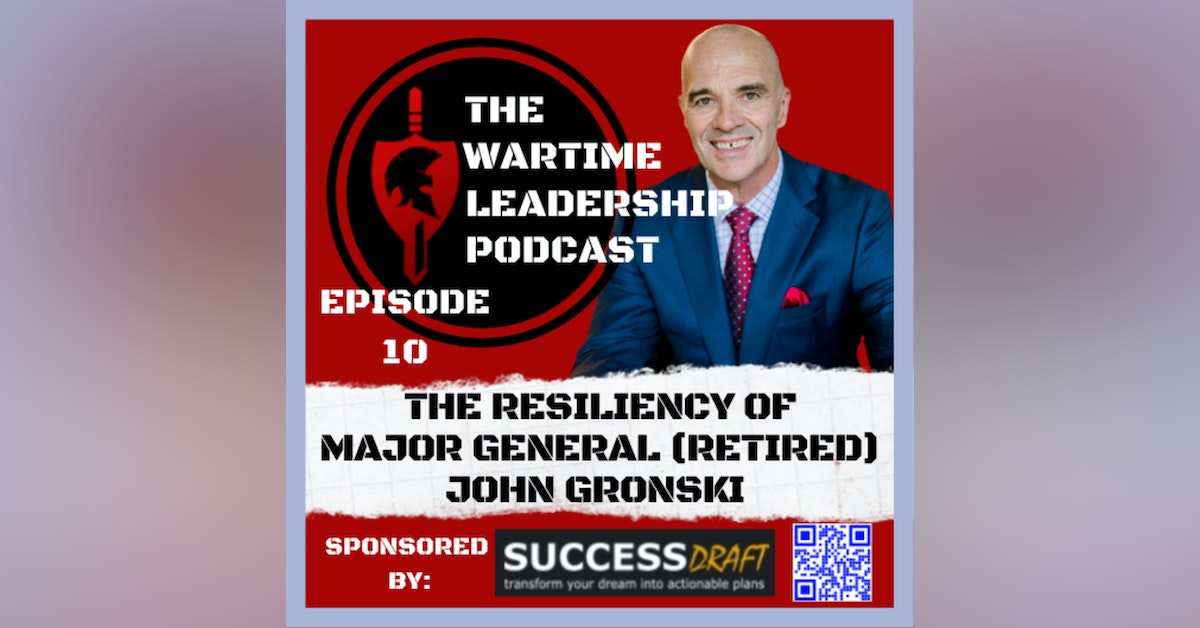 Season 1
THE Wartime Leadership Podcast: The Resiliency of US Army Major General (ret) John Gronski is now available! John is a battle-tested veteran, leadership consultant and trainer, an international speaker, executive coach, author, and director of leadership academy for student-athletes at Lebanon Valley College. His core values are built around character, competence, and resilience. John is the founder and CEO of Leader Grove LLS. He has graduated numerous military schools including Ranger School and Airborne School. His military decorations include, but are not limited to, the Army Distinguished Medal, Legion of Merit and the Bronze Star. During this episode, John walks us through his leadership philosophy which includes Character: Trust, Values, and Care, Competence: Vision and Plan of Action, Problem-solving, Decision making, and Communication, Resilience: Positive energy, Fitness, and Overcoming challenges. John walks how these core values manifest on and off the battle field. Listen as this amazing leader navigates us through powerful stories from his deployments and how they helped him develop his spiritual resiliency and the resiliency of the Soldiers, Sailors, Marines and Airmen that served under him. John’s book recommendations: Courage: The Backbone of Leadership by Gus Lee Courage: The Backbone of Leadership: Lee, Gus, Elliott-Lee, Diane: 8601419167890: Books: Amazon.com The Leadership Engine by Noel Tichy The Leadership Engine: Tichy, Noel M.: 9780887309311: Amazon.com: Books We Were Soldiers Once…and Young by Hal Moore Amazon.com: We Were Soldiers Once...and Young: Ia Drang - The Battle That Changed the War in Vietnam: 9780345475817: Harold G. Moore, Joseph L. Galloway: Books This show's episode is brought to you by SuccessDraft.com where we help turn your dreams into drafted plans. Be sure to like / follow / share us on: Instagram: Wartime_Leadership Twitter: @WLeadershop Facebook: The Wartime Leadership Podcast All episodes are available at http://www.thewartimeleadershippodcast.com and http://www.wartime-leadership.com A special thanks to the second half of the show's talent, the show's producer G. Fraser from www.369sounddesign.com. --- Send in a voice message: https://anchor.fm/wartime-leadership/message Support this podcast: https://anchor.fm/wartime-leadership/support